The sight of Donald Trump squabbling with his former strategist Steve Bannon bears a remarkable resemblance to two ferrets negotiating the inside of a sack. It seems the two men who engineered the “populist” takeover of the White House are rather less popular with one another than they used to be one year ago as they prepared to misrule the world.

You probably continued to delude yourself about Bannon’s sway even after he was pushed out of the White House when you heard Trump saying this in the Rose Garden less than three months ago: “Well, I have a very good relationship, as you know, with Steve Bannon. Steve’s been a friend of mine for a long time. I like Steve a lot.”

Like so many things that leave Trump’s mouth and worm their way into your mind, this is plainly fake news.

Because as we discovered from Trump’s own statement to the press on Wednesday (not a tweet, and not the Onion, either), Bannon was in fact a braggadocious nobody who failed in life and has now gone insane.

“Steve Bannon has nothing to do with me or my presidency,” Trump said. “When he was fired, he not only lost his job, he lost his mind. Steve was a staffer who worked for me after I had already won the nomination by defeating 17 candidates, often described as the most talented field ever assembled in the Republican party. Now that he is on his own, Steve is learning that winning isn’t as easy as I make it look.”

Can you feel the burn, Bannon? You will when you realize you’re just a selfish fraud who betrays the workers while having no talent of your own.

“Steve doesn’t represent my base,” Trump continued before the playground brawl ran out of recess time. “Steve pretends to be at war with the media, which he calls the opposition party, yet he spent his time at the White House leaking false information to the media to make himself seem far more important than he was. It was the only thing he does well.”

It’s one thing for Bannon, a notoriously undisciplined blowhard, to settle scores with Trump’s family and friends in the latest napalm-fuelled book from Michael Wolff (no relation). It’s entirely another thing for Trump, another notoriously undisciplined blowhard, to respond in kind. One man is a washed out political hack. The other is the 45th president of the United States. But judging from the conduct of the latter, it’s often hard to tell the difference.

You might think the trigger for Trump’s outburst was Bannon saying that the campaign’s meeting with Russian government intermediaries in 2016 was “treasonous, or unpatriotic, or bad shit.” That meeting included Trump’s son Donald Jr and his son-in-law Jared Kushner.

But then again, you’d be wrong. The trigger for the outburst is in fact Trump’s trigger-happy nature. It was, after all, just one day after he bragged about being ready to launch his nukes at North Korea with a nuclear button that is so much bigger and so much more radioactive than Kim Jong-un’s.

The last time someone nailed Donald Trump quite so exquisitely, it was the closing phase of the Republican primaries that Bannon obviously missed because of his own incompetence.

Ted Cruz unleashed an awesomely honest analysis of the man who would go on to become president, describing his freakishly obvious pattern of projecting his own failings onto others. “This man is a pathological liar,” Cruz said. “He doesn’t know the difference between truth and lies … In a pattern that is straight out of a psychology text book, he accuses everyone of lying. Whatever lie he’s telling, at that minute he believes it … The man is utterly amoral.”

That was only 18 months ago, which translates in Trump time to 18 dog years. Now Ted Cruz loves Trump’s positions on Jerusalem and net neutrality, and shares hilarious Obama-mocking cookies with his son.

Trump himself continues to describe his own conduct whenever he seeks to trash his opponents. It is hard, but not impossible to condemn Bannon for pretending to be at war with the media while spending your time live-tweeting cable TV and yapping with friendly anchors from Fox News or passing reporters from the New York Times.

It is also hard, but not impossible to accuse Bannon of losing his mind when you have clearly lost your own.

What does the Trump-Bannon bust-up mean for us all? First, this must surely qualify as a Guinness world record end to our new year’s hopes for a return to sanity or normalcy in 2018.

But at the same time as dashing our hopes, it also must fill us with glee at the likely resurrection of that other avatar of slash-and-burn Trumpism: Anthony “the Mooch” Scaramucci. 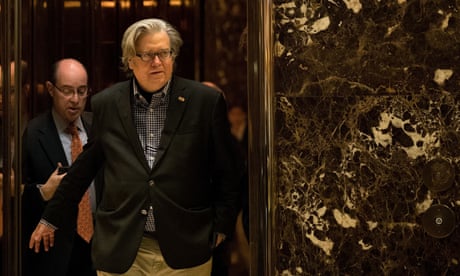 For who but the Mooch would accuse Bannon of promoting himself (and sucking his own genitals) instead of serving the great leader?

Scaramucci has been telling friends that Trump wants him back in the White House, which would be a wonderful new year’s gift to column-writers the world over.

In the meantime, we have this unsubtle back-and-forth between the Mooch and the cookie-loving Donald Jr on Twitter after the Trump-Bannon bust-up. “Minus the foul language The Mooch pretty much nailed it”, said the president’s genius son.

Minus the national interest and any shred of presidential decorum, this would be an epically incendiary turn of events. Let’s prepare for the worst and hope for the best in this early dawn of Trump’s new year.