A tiny carnivorous marsupial that was presumed extinct in New South Wales has been discovered just inside the border, two years before scientists planned to reintroduce it.

, Dasycercus cristicauda, was caught in a trap in November by University of New South Wales researchers working on the Wild Deserts project, which aims to reintroduce long-absent marsupials to two predator-free areas of the western edge of Sturt national park.

It is the first time the animal has been seen in NSW. Previously, the only evidence that it once lived in the state’s arid west was a few bones found inside owl pellets in the caves of Mutawintji national park, near Broken Hill. 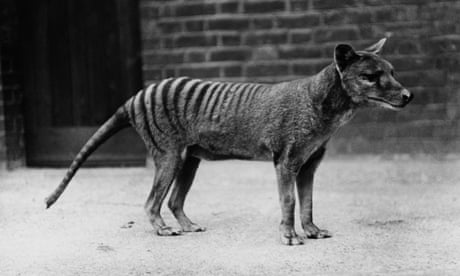 It was an unexpected but fortuitous find, Wild Deserts researcher Rebecca West said.

“As an ecologist, when you start a survey you often sit down and have jokes about what you might catch, and list things that are extinct or highly unlikely to be in the area,” West told Guardian Australia. “We had actually done that on that morning, saying, ‘Wouldn’t it be great to get a mulgara?’ And sure enough there was one in our pit traps.”

A trap was set in the dunes of the Strzelecki desert just 700m inside the border from South Australia. Crest-tailed mulgara are known to live in the SA side of the desert, as well as in the Simpson desert covering SA, the Northern Territory and southwest Queensland, but the closest known population was 60km away.

The animals are listed as vulnerable but West said there had been a 70-fold increase in population in SA over the past 20 years, coinciding with the release of the calicivirus that targeted feral rabbit populations.

That had the dual effect of increasing ground cover, because the rabbits weren’t there to graze it out, and prompting a corresponding drop in feral cat and fox numbers.

“Increased vegetation and decreased predation meant the species was able to increase without being picked up by predators,” West said.

Crest-tailed mulgaras weigh about 150g and are identified by a black crest-like tuft along their tail. Mature males can grow to about 23cm, with half that length again as a tail, while females are a bit smaller.

West said the animal they trapped was “of dispersing age”, suggesting that others might be moving into the area.

It is prime mulgara habitat, with easy digging to build their extensive burrow networks and sufficient ground cover to provide a fair picking of small lizards and other invertebrates.

The area is also about to be protected from feral predators, with the construction of a 1.8m high mesh fence around two separate enclosures, each covering about 20 sq km, scheduled to begin in 2018.

Baiting will occur to wipe out foxes, cats and rabbits from inside the fenced area, and seven species of marsupial that have not been seen in the area for 90 years – or six, now that the mulgara has found its own way back – will be reintroduced.

The greater bilby, burrowing bettong, western quoll, western barred bandicoot, gold bandicoot, and greater stick-nest rat (a particularly curious creature that constructs elaborate nests out of sticks using its urine as glue) will all be reintroduced from 2019.

The fence is based on the design used in the Arid Recovery wildlife reserve in northern SA.

The lower 30cm will be constructed of mesh that is 30mm in diameter, which is too small for rabbit kittens to hop through. Above that height the mesh widens to 50mm, allowing small agile marsupials like the crest-tailed mulgara and the stick-nest rat to climb up and scurry through.

The skirt of the mesh is buried to deter rabbits and foxes and the top flops over, making unpleasant climbing conditions for cats.

If the mulgara do not make their way into the area in sufficient numbers, West said, scientists will revert to their plan of reintroducing them along with the other six species.

“They have started to get themselves here anyway but it may be something where the numbers may have to be supplemented,” she said.