Kate (not her real name) and her husband have run cattle grazing properties in central Queensland for more than 30 years. On remote and isolated properties like that, communities are close-knit and neighbours rely on each other to survive.

But Kate says her neighbours hate her family. Their crime? Not cutting down enough trees.

“Within the 30 years that we have not cleared, they went from saying ‘You don’t understand’, they then say ‘You have to do it’ and then ‘You don’t want to clear? What’s wrong with you?’”

In regions like that, neighbours rely on each other for safety and security, as well as social connection. But Kate’s family is now left without that security.

A storm recently ripped through one of her cattle grazing properties while she was off the property, and the power to her and the surrounding properties was knocked out. “Nobody gave us a call. Nobody told us so that we could put on our generator.”

Kate says sometimes their neighbours have even taken matters into their own hands, and cleared trees on her property without her permission.

All up, since Europeans arrived, Australia has lost more than 40% of its forested area

“When there are no fences – they come in and clear knowing very well it’s my land,” Kate says. “That’s vandalism – coming and clearing – because they know that is where it hurts most.”

Julie – also not her real name – owns another block of land in central Queensland.

“Conservation is probably the wrong word in terms of, I just think the country should be in good nick,” Julie says, describing why she doesn’t clear aggressively on her land.

She says the vegetation helps to keep rain on her property, rather than allowing it to wash off into the channel country. The trees pull up trace elements from deep in the sandy soil, and the leaves fertilise the ground. They also attract birds, which keep some of the bugs under control.

Julie says neighbours see her as weird for not clearing – and also for being a woman running her land without a man. As a result, she says her neighbours have stolen her cattle and shot her dogs.

“There is still a huge cultural thing about the male conquering everything,” Julie says, trying to explain the attitude of her neighbours.

The unsocial, sometimes threatening attitude of others in the community, is why Julie, like Kate, wanted to protect her identity. 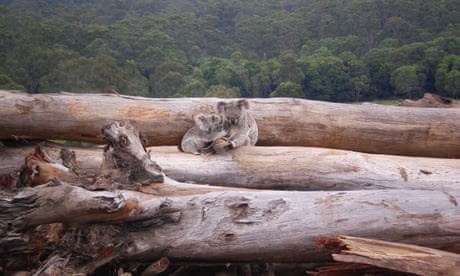 Deep in the culture

Kate says she doesn’t blame her neighbours for their attitude. She sees it is an attitude that has become deeply embedded in the Australian farming mindset over many decades.

She seems to be right. Clearing the landscape seems deeply embedded in Australian law, history and culture.

The clearing of giant trees was celebrated by one of Australia’s most iconic poets, Dorothea Mackellar, who coined the phrase “a sunburnt country” in her poem My Country. In her poem Burning Off, she hails the clearing of a native landscape using fire, the felling of a giant tree, and its replacement with a field of wheat.

Full seven fathoms above the rest
A tree stands, great and old,
A red-hot column whence fly the sparks,
One ceaseless shower of gold.

All hail the king of the fire before
He sway and crack and crash
To earth – for surely tomorrow’s sun
Will see him white fine ash.

The king in his robe of falling stars,
No trace shall leave behind,
And where he stood with his silent court,
The wheat shall bow to the wind.

Dr Leonie Seabrook, a landscape ecologist from the University of Queensland, spent years speaking with landholders around Queensland about what drove them to clear or not clear, and studied the policy and legal drivers of that clearing.

“Into the 1980s, there was still this perception that there were endless forests and it didn’t really matter,” Seabrook says. “That generation that were in control at that time, they saw development of wild areas as being a good thing … If you had farmland, you developed it.”

Clearing trees and shrubs from the Australian landscape was seen as development – adding value to otherwise worthless land. “It was very much a social norm at that point.”

And still today, farmers that contravene that social norm, like Kate, can be treated harshly.

Seabrook says this harsh attitude is partly based on fear and defensiveness. “There’s this mental thing that if you’re feeling guilty – and I think a lot of farmers have been made to feel guilty – you then get very cross if someone is sitting there and they can actually survive very nicely thank you with 30% of native vegetation on their land.”

The situation is worse than anyone appreciates. We don’t have much left.

Kate says her neighbours can see that during drought, she still has shrubs on her property for cows to eat, so she doesn’t need to buy as much hay. And in hot weather, her cows have shade, so they can be more productive.

“They don’t like to be told they’ve done something wrong because it’s irreversible. We can still clear, but they can’t reverse what they’ve done.”

Kate also thinks not clearing her land aligns her with “greenies” in the eyes of her neighbours, and that threatens them. She says farmers fear conservationists will stop them from being able to farm their land in a way that makes a profit.

Seabrook’s research led her to a similar conclusion. She says farmers and graziers quite justifiably fear that one-size-fits-all rules that ban any clearing on their property will prevent them from being able to make a living.

The view of development that holds that native vegetation must be eliminated was established over centuries. It began in Europe and was imported with the European invasion of Australia.

It was multiplied by official government policy that forced landholders to clear. So it is perhaps not surprising there is anger at more recent laws that tried to flip those policies.

In the 19th century, Australian states started passing laws that forced landholders to clear their land, and direct government incentives for clearing land continued through to the 1980s.

A lot of farming and grazing land was leasehold, and unless landholders cleared some percentage of the land – sometimes 90% – the government would take it back.

What was lost in the early years

Early clearing was centered around where Europeans colonised. It started around Sydney Cove, on land that is the territory of the Gadigal people of the Eora Nation. It then spread to Victoria, and later to South Australia, Western Australia and Queensland.

With its fertile soil, Victoria was the fastest and hardest hit, and it is now Australia’s most cleared state, with 66% of its native vegetation gone.

Queensland was late to the game, but the clearing occurring there now outweighs the clearing in all other states combined. Rates there are rising, and they currently sit at about 395,000 hectares per year – steadily approaching the peaks the state saw in the 1980s and early 2000s.

All up, since Europeans arrived, Australia has lost more than 40% of its forested area.

Compared to many parts of Europe where forests and other native vegetation were almost completely wiped out, some say Australia has a lot left to lose. As a European Kate feels strongly about the land she looks after.

“[In Europe] we don’t have anything left and so we have to protect what’s there,” says Kate. “Maybe we do have more appreciation of the wildlife of Australia than other Australians – if you’re born here, you get used to it. But for us, it’s so amazing.”

But according to Martin Taylor, the protected areas and conservation science manager at WWF Australia, the idea that there is plenty left in Australia is misleading.

“The situation is worse than anyone appreciates,” says Taylor. “We don’t have much left. All the richer habitats have been largely converted.”

“What you see remaining on the maps are often national parks, which tend to be on rocky habitats that industry didn’t want. If you look at any river system – with the richest alluvial soil – they’ve all been cleared long ago.

“The disgrace now is that the clearing is encroaching into relatively marginal land.”

Seabrook says a “perfect storm” of technological, economic and social factors allowed clearing to pick up pace in the middle of the 20th century. Prices for produce were high, mechanised clearing was perfected and government incentives were designed to drive clearing into regions that were previously less economical to develop.

As prices and technology improved further, it became possible to clear worse land, while still turning a profit.

The only thing that halted Australia’s intense clearing spree in the 1990s was the country’s attempt to lower greenhouse gas emissions to meet its Kyoto Protocol targets.

Clearing was reigned in, mostly as a result of law changes in Queensland, and Australia’s greenhouse gas emissions dropped.

But then everything changed.

A broken election promise and a change of law in Queensland by LNP premier Campbell Newman unleashed the bulldozers and delivered today’s land clearing crisis, the impacts of which are combining with an unprecedented number of threats from climate change, pollution and invasive species.

As the land clearing crisis in Queensland looks set to spread south to NSW and across the north to the Northern Territory and Western Australia, conservationists face an uphill battle challenging the deep-seated notion that Australian native vegetation is there to be cleared. 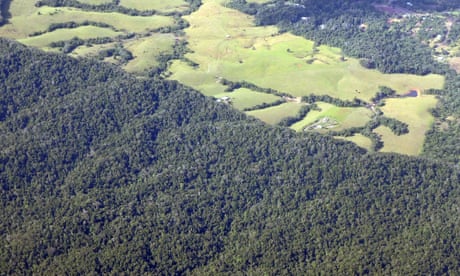 According to Taylor, that attitude may only end up shifting when it is forced to by market forces. Like the tuna fishing industry was revolutionised by “dolphin safe” and other accreditations, he says “deforestation-free beef” is gaining traction, and could mean those that don’t change their ways are left without a market.

“The attitude is that you can’t be a serious grazier if you’re not clearing,” he says. “But the markets are changing to the points that they will be the people who will be able to sell their products into the deforestation-free supply chains that big retailers are asking for now.”