In the south-west corner of NSW’s Liverpool plains, in an area called Bundella, farmer Megan Kuhn runs beef cattle and merino sheep with her husband, Martin.

They have 400 breeding cows that will calve in six weeks. Shortly, 89 of those cows will leave the property, sold to an abattoir because the cost of feeding the animals during drought has become too great.

“There is nowhere to send them to pasture so they are going to be slaughtered,” Kuhn says.

“We’re killing a cow and a calf at this late stage of pregnancy. The drought is so widespread there’s just no options left for stock producers to put them anywhere. That’s why it’s so heartbreaking. 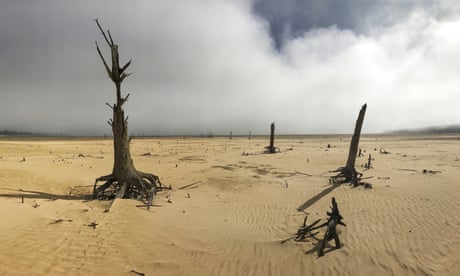 Water shortages to be key environmental challenge of the century, Nasa warns

“Australia doesn’t realise. The cattle we’ve got are rapidly diminishing because of the drought.”

Further north, about 20 km from Mullaley, Margaret Fleck is seeing conditions on her property she has not encountered in the 20 years she has been there.

She and her partner Paul run beef cattle, producing grass-fed beef for the domestic and export markets.

“It’s terrible on the back of seven below-average rainfall years in a row,” Fleck says.

“We can’t get over a string of really hot summers. With the sheer consistency of extreme temperatures, the rate of evaporating is so high. We don’t have any surface water left on our property.”

They are relying on two bores and have begun selling their cattle as it becomes harder to sustain the high cashflow that’s necessary to buy in feed.

Everywhere is worse than I’ve ever seen it

“We spoke to the owners who had this property from 1954 to 1989. We asked what the creek was like in their 34 years. They said it had never dried up,” Fleck says.

During the past 14 months, the Bureau of Meteorology has recorded below-average rainfall across New South Wales, central Queensland, the north-west of Victoria and into South Australia.

NSW has been the hardest hit in 2018. With the exception of the north and south coasts, most of the state has recorded the lowest rainfall in a five-month period since 1900.

Soil moisture levels are below average across much of Australia and in its latest winter outlook, the bureau is forecasting warmer and drier than average conditions across large parts of the country.

Communities in NSW say people are struggling and the rest of the country is not aware of the extent of the troubles in parts of that state.

“I had noted it hadn’t been getting a lot of attention,” says Jane Judd, a retired science teacher from Coonabarabran who sits on the regional advisory committee of the National Parks and Wildlife Service.

“I’m on a number of committees and boards and I’ve travelled from Tamworth to Cobar, Moree to Goulburn, and everywhere is worse than I’ve ever seen it.”

Judd owned a farm at the southern end of the Pilliga which she sold several years ago to the national parks service. The property sits in fertile valleys that had permanent water and swamps. She took a drive to the site a month ago and said everything had dried up.

Coonabarabran itself is on level-six water restrictions. Last week the Timor dam was at 23.6 % of its capacity and in recent weeks the Warrumbungles shire council has been sourcing water from four bores and the Castlereagh river, rather than the dam.

“They’re desperately sinking bores around the town to try and augment the storage capacity of the groundwater,” says Peter Brookhouse, a Coonabarabran resident and retired fire management officer with national parks.

Malcolm Turnbull has been touring drought-stricken parts of the country with the agriculture minister, David Littleproud, and the deputy prime minister and Nationals leader, Michael McCormack.

Kuhn says while the tour is welcome, any conversation needs to be more open to voices from those affected.

“I admire that they’re on the ground talking to people but it’s too bloody quick,” she says. “It’s a quick fix, it gives nothing tangible for people.”

She says there are simple things that could be done to assist farmers in trouble: chopping firewood, helping mend fences or offering assistance to eradicate feral animals such as pigs and goats that wander onto properties in search of water – all jobs that get neglected when farmers are in “a vacuum”, consumed with trying to keep their stock alive.

“When you read things about farmers having to destroy their own stock, that’s one of the hardest things a farmer would have to do,” she says.

“If you can get help with that from the government to do that – that would be something tangible.”

He says the government’s emphasis on preparation for a drought is appropriate because farmers have to make sure the right management approaches are in place before drought sets in. But he believes more can be done to help farmers learn from past experiences and make sure there is solid investment in rural infrastructure. 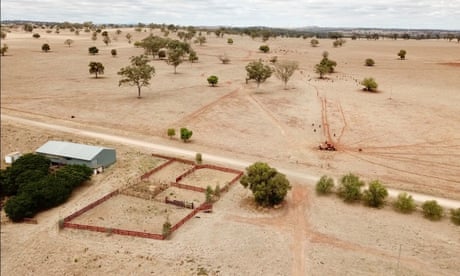 Donaldson is 55 and has worked in farming his whole life. He has experienced droughts before and says rainfall conditions on his property are similar to those he experienced in 2002.

“But what’s made it worse is a series of drier summers leading up to this,” he says.

“The last four or five years we’ve had very dry summers and extreme heat and evaporation events. We’re getting very big temperature spikes now where there never used to be.”

He has started selling some of his cattle to feedlots and needs rain to plant winter crops such as oats, wheat, canola and legumes.

“The big issue for us is in the next three weeks we’re going to lose our winter crop-sowing window,” he says.

“Once you lose that window that will mean that we have no winter crop and that will have huge implications for the whole eastern seaboard.”

This week, farmer and former Nationals leader John Anderson cautioned Turnbull against politicising the drought by attributing it to climate change, telling the Financial Review the conditions were the worst he had experienced, but not unprecedented.